In September 2021, Apple released iOS 15. With it came Mail Privacy Protection (MPP) and the ability for users to take more control over their email privacy.

There was plenty of speculation within the email marketing industry about what this update would mean for marketers. And plenty of fear-mongering along with it.

But now that the dust has settled, we’re looking at what impact Apple iOS 15 has had on email marketing. And what you can do to adapt to the changes.

Mail Privacy Protection (MPP) is an update in Apple iOS 15. It enables users to make it harder for email senders to follow their marketing activity.

Since iOS 15 was released, Apple Mail users now have the option to turn on Mail Privacy Protection. And they’re prompted to do so with this message:

If users select to protect their mail activity, what this essentially does is affect open tracking in an email. And it gives control to email recipients as to whether their email opens are tracked.

What is open tracking and how does it work?

Open tracking is technology used by ESPs, like EmailOctopus, to calculate open rates. It works by adding a small 1px image, which is unique to the subscriber, at the bottom of the email. When the unique image loads, the ESP makes the assumption that the email has been opened by the recipient. This is then reflected in email campaign reports as an open.

As a technology it has always been unreliable. Some people open emails with images turned off while some ad blockers block 1px images. In these cases, emails might be opened without the ESP being able to register that the open took place.

Open tracking has largely been useful in providing insight into the performance of an email, at least in terms of opens. But with Mail Privacy Protection, Apple Mail (on Mac and iOS) will now load those 1px images in an email as soon as it’s received. Even if the user hasn’t physically opened the email themselves.

As a result, emails sent to an iOS 15 device (or a Mac running Monterey) using Apple Mail, will show as an open. With a few caveats.

Firstly, MPP only pre-fetches images when the device is plugged in to a power source.

Secondly, MPP only pre-fetches images when the device is connected to WiFi.

How has MPP impacted email marketing and campaign reporting?

But here are five ways that MPP is affecting email marketers more generally.

By pre-loading image tracking pixels, Apple Mail effectively shows emails as opened when they might not have been. Which means any Apple Mail users who opt in for MPP will now show as email opens in your campaign reports – whether or not they opened the email.

This was predicted to result in significantly higher open rates for campaigns sent after September 2021, when MPP was rolled out. However, the impact wasn’t as huge as everyone predicted. And that’s for a few reasons:

The percentage of iOS mobile operating system users is much higher in the USA (58.45%) compared to Europe (35.42%). So email marketers in the States are likely to have seen a bigger jump in open rates than those dealing with a European audience, for example.

But how big this jump might be depends on many different factors – chiefly adoption of iOS 15 and MPP, and Apple Mail usage. As well as your inbox placement prior to iOS 15 – if most of your emails are going to spam, then MPP won’t affect your open rates. And whether the user is connected to WiFi and a power source.

Also known as split testing, A/B testing is the practice of experimenting with two variants – A and B – to see which performs best.

In email marketing, A/B testing is commonly used to test the effectiveness of a subject line. If subject line A gets more opens than subject line B, it’s considered the winner.

But in order to obtain accurate results in such an experiment, you need accurate open rate reporting. So with MPP, A/B testing subject lines don’t work as well anymore.

It’s common practice for email marketers to identify inactive subscribers based on recent open activity. For example, if a subscriber has not opened one of your last five emails, it’s a good sign that they’re losing interest in your messages.

Once these inactive subscribers are identified and segmented, email marketers typically send these contacts re-engagement campaigns. The goal is to encourage them to become active again.

However, with MPP it means that you could be missing inactive subscribers when you use this kind of segmentation. That’s because Apple Mail users opted in to MPP will register as having opened your emails, even though they might not have done.

Some email marketing tools include an AI-powered send-time optimisation feature. This calculates the best time to deliver an email to a recipient based on when they typically open emails.

With MPP enabled, send-time optimisation will not be accurate. That’s because Apple Mail downloads the tracking image pixel immediately when the email is received. Which could be hours before the recipient actually reads the email.

Countdown timers will also cease to work effectively in emails delivered to Apple Mail. These timers work by loading a GIF that counts down to a specific time. But GIFs can’t be long enough to countdown from 7 days. So each time the email is opened, a new GIF is requested. And because Apple will be caching these images on their servers, a new GIF won’t be regularly requested or loaded.

Automated email sequences based on opens will need to be reconfigured

But with MPP enabled, this means that an Apple Mail user might receive an email you don’t intend for them to receive. So if you have automated sequences set up based on opens, you’ll need to reconfigure these to use another engagement metric instead.

What can email marketers do to adapt to the changes?

Regardless of whether Apple’s Mail Privacy Protection has inflated your open rates, there are some steps you – as an email marketer – should be taking to adapt to these new privacy changes.

It’s easy to be reliant on open rate as the main measurement of your email campaign success. The more people that open your email, the more successful you deem the campaign.

However, the truth is that open rate has always been unreliable. And with Apple’s Mail Privacy Protection in the mix, there’s never been a better time to use other engagement metrics as a measurement of campaign success.

These metrics include clicks and conversions. Moving your focus to clicks is a good idea as this tells you whether your email content is engaging enough to inspire action.

And if you’re not doing so already, use UTM codes in your emails to track website conversions with Google Analytics. This way you can see how your emails are impacting subscriber behaviour. And what subscribers do on your website after they’ve clicked a link.

It could also mean tracking unsubscribes more closely. If your unsubscribe rate is decreasing, it suggests that people are enjoying your content. Which is a positive sign.

In the MPP era, knowing whether a subscriber is truly active will need to rely on clicks. So now’s a great time to reconsider your email style and look at ways you can encourage more clicks.

For blog newsletters, this could mean including more links to more content to give subscribers more reading options.

For promotional emails, this could mean ensuring all images link to a relevant page on your website.

And for emails in general, this could mean using a tool like FeedLetter to collect feedback from your subscribers.

As mentioned earlier, the worst MPP does is mean you miss some inactive subscribers. But this will likely only be a small portion that you miss. You don’t need to worry about sending a re-engagement message to the wrong people with MPP. So there’s no reason to stop the practice.

And list cleaning continues to be important to your overall email deliverability.

Despite the exaggerated claims of Apple iOS 15’s impact on email marketing, three months into the rollout and the industry has changed very little.

Some email marketers have noticed jumps in open rates. While others have not.

The fact is that whether Mail Privacy Protection impacts your email campaigns depends on a variety of factors. And it’s not something you have a great deal of control over.

So instead, stick to the email marketing fundamentals:

Do this and your email marketing campaigns will continue to be effective – with Mail Privacy Protection or otherwise. 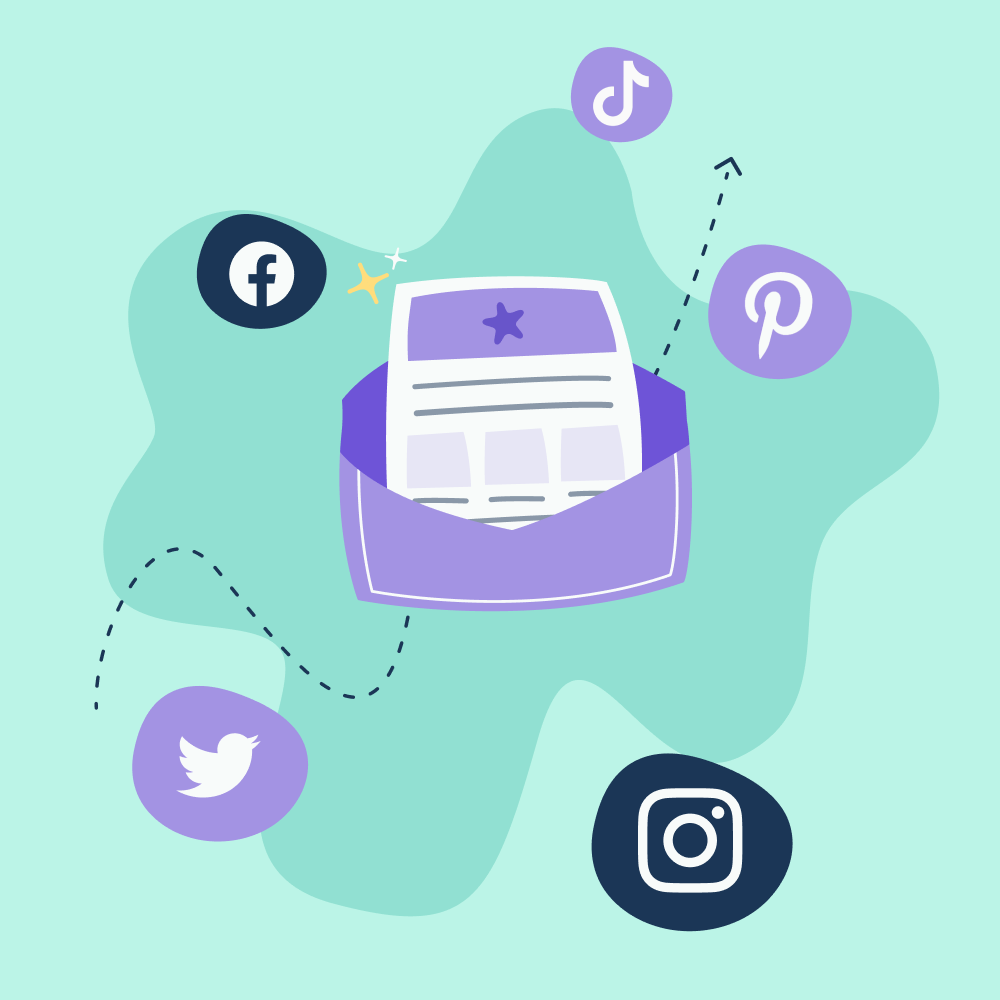 Next story :How to grow your email list using social media

[Infographic] The anatomy of a successful welcome email

First impressions can make or break a relationship, a sale and even a business. It’s why the first interactions customers have with your brand are so important. As the saying goes, “you never get a second chance to make a first impression”. For email marketers, that means engaging with new subscribers the moment they sign […]

[Updated for 2021] Valentine’s Day is big business. According to the National Retail Federation, consumers spent $21.8 billion on gifts for partners, friends, and even pets, in 2021. And this year’s pandemic and international lockdowns meant that a lot of that money was spent online. Keen to grab a piece of that consumer spend, brands […]

A guide to email marketing on Black Friday

[Updated for 2021] Black Friday – the day best known for fights over cut-price televisions in Walmart is now an unmissable event in the calendar for all ecommerce brands. And increasingly, more and more industries are jumping on the band wagon from SaaS to travel.  It’s a consumer holiday that has moved increasingly online, hurried […]

If you’ve been using email marketing for even a little while now, then you might notice a few challenges that come with the channel.  First, if you’re like the majority of marketers who are using emails to stay in touch and promote your offers to customers, one thing you might struggle with is boosting your […]

Why you’re able to save so much money with EmailOctopus

At EmailOctopus, we do everything we can to keep our prices as low as possible. Our mission is to help you save up to 90% on your email marketing – while still ensuring first-class deliverability. We’re everything you need from an email marketing platform, but for a fraction of the cost. So how do we […]

How to build a paid subscription newsletter with EmailOctopus

Thanks to the internet, writers have more opportunities than ever to grow an audience and deliver premium content. And make good money while doing so. In the early noughties, blogging was the primary modus operandi for digital publishers. But in more recent years, email has become the new platform of choice. And paid subscription newsletters […]

Leave a comment Cancel
Comments to: The impact of Apple iOS 15 on email marketing
Cancel reply