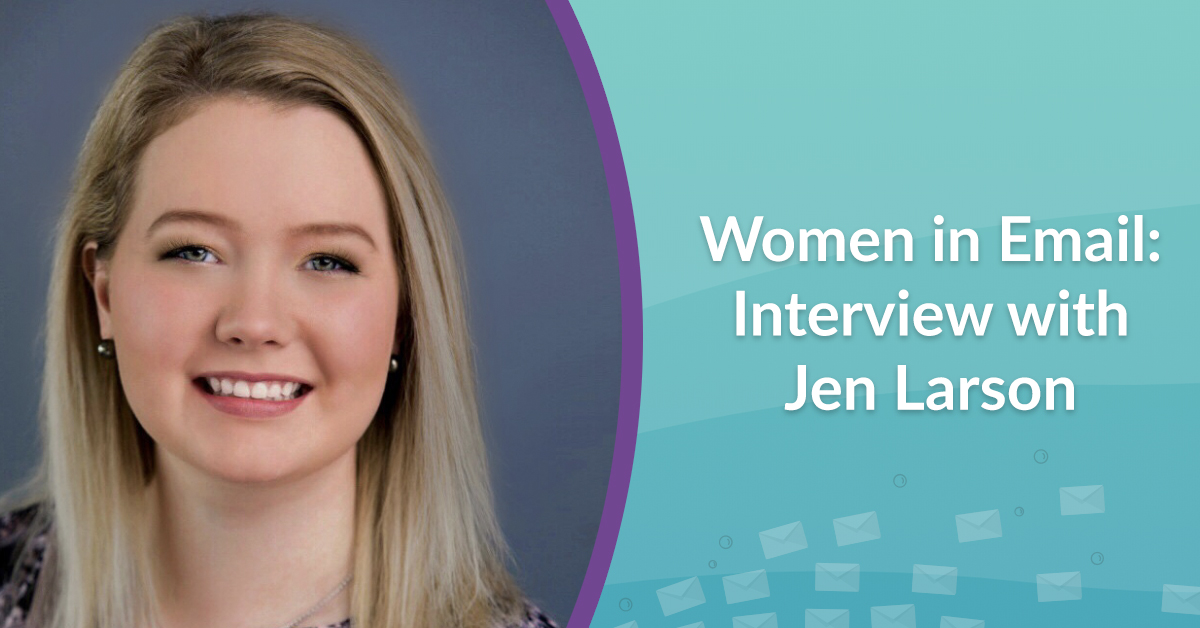 Back in 2015, Moz analysed their Online Marketing Industry Survey and highlighted that women only accounted for, on average, 30% of the digital marketing workforce.

And it’s not hard to imagine that when you enter the niche fields of technology and data within digital marketing, that average proportion shrinks further.

Starting her career as a chemist, Jen Larson has often found herself working in male-dominated fields. And it prepared her well for the move into data-driven digital marketing and technology.

So ahead of this year’s International Women’s Day, I caught up with Jen to discuss gender diversity and her experience in the industry.

You’re a marketing director of technology, which would be considered a male-dominated arena. What challenges have you faced as a woman working in the data and technology fields of marketing?

There has been my fair share of challenges that I think have been specific to being a woman working in the data and technology fields of marketing. It seems to be that it’s still very male-dominated and sometimes when you’re a lone voice with a lone kind of viewpoint in a group, it can be hard to express yourself.

I think that is one of the main challenges that Women Of Email seeks to address in its group. Finding a group like WOE that is non-judgemental and there to support one another is something that can give you that confidence boost to enter those realms where you are a “one-off” with the confidence that you know what you should and need to know.

My background is in the sciences. I did not study marketing or start off in marketing so I’m pretty used to being in that sort of environment of being more “one-off”. In college, there were many courses where I was the only woman in the room and would be shut out a lot of conversations around gender issues. So, I switched fields having it be more of a normal thing to have that confidence without the back-up of other women. But it is definitely easier and encourages more participation in the space to have these groups where you can form that back-up.

Have you found, either in science or the data field of marketing, that men do not take you as seriously?

Yes, I have. Sometimes I chalk it up to being younger, sometimes being a woman, and sometimes both. I have found when speaking to vendors and trying to vet them out they always ask me “Well, who’s the technology point person?”. There’s an automatic assumption that it’s not me. I don’t know if men face that same question or not but it always strikes me as odd, when I present myself as the “Director of Technology” that I’m asked that sort of question.

Have you noticed a change in the industry since you first started your career?

I have noticed a change just in the past few years of being more active. I think people are becoming more aware of any gender imbalances due to overall national surveys and sentiments as well as more industry-specific surveys and results.

So the way I got my one speaking role was the moderator there, he wanted to get a woman on the panel. He realized that he had created a panel of all men, so he reached out to the WOE and that’s how I got connected to that opportunity. I know a lot of women have gotten connected to opportunities in that way – having someone actively seek out someone from a minority group. The second part of that is letting people know what channels to use to fill any voids, and WOE helps to become that channel for women in this space.

Why do you think women lack the confidence to stand up at these events and speak?

There have been studies that show, in general, that with job openings men will apply when they hit 30% of the qualifications and women want to hit 100%.

Similarly, I think there’s a perception that in order to speak at an event you have to be an expert in all aspects and all areas of your field. That’s just not true – you just have to know what you know to present and to answer a few questions, and you’re good! You don’t need to be this amazing and outstanding expert in the field to be a great teacher and presenter. Chances are the one area you do know really well, people in the audience don’t – or if they do, they have your exact perspective on it.

And is that what gave you the confidence to speak at the Las Vegas Email Innovations Summit last year?

I had spoken previously on a panel about email mistakes and operational mistakes and how to overcome them. That was a panel put on by the WOE at EIQ and so I got some great experience being on a dynamic panel there. Going further back in my history, part of being in science is that you have to present your research in front of people and be questioned pretty heavily on it – that was great preparation for speaking as well.

For the Vegas panel, the support of my panel and having them be open to me being a part of that – even though I was a bit more junior to everyone else on the panel –  and being encouraged to give the insights I had, I think was so valuable.

And what have you learned from speaking at these events?

I’ve learned it’s really not that bad! I’ve learned a lot about presenting from the feedback I’ve gotten. But my main takeaway each time is that the content of what I have to say does have value and it does contribute meaningfully to the industry overall. That feedback – both good and bad – definitely leads me to seek out more of those opportunities.

Getting feedback from audiences and organizers and having that support to continually improve and go speak at other opportunities is extremely important.

What do you think can be done to encourage more women to put themselves forward as speakers at industry events?

I think those event organizers or those seeking speakers could seek out the spaces where women are currently. I know that Litmus has great conferences and they offer support for getting together your presentation pitch and that’s great for first-time speakers. Having that transparent guidance helps to include a lot more people from diverse backgrounds who may not have the resources or encouragement to submit to speak on their own.

There does still seem to be a disparity in the genders at higher senior levels of marketing – what ideas do you have around getting more women on the board and in those director positions?

So, that’s difficult! I think that there’s still a bit of misperception about young women overall in the workplace and that’s really when you start your career progression. There’s still a bit of that perception that they’ll be out for a bit more if they are mothers or their partner’s job should be factored in some way to theirs. So, promotion opportunities – whether through conscious or unconscious bias – may be overlooked for younger women earlier in their careers.

I’m really a fan of this idea of building out a shadow board or a group of people who leadership turns to for ideas. The group members have the qualities that show a tendency towards leadership and this program can help to create that mentor relationship between leadership and contributors with more people than just their direct reports. It also would allow more diversity of thought – based on age, gender, and experience – that might’ve been overlooked before.

Networking is probably the biggest thing that will help you grow in your career and figure out what path you should take next. Part of networking is putting yourself out there and speaking and showing the knowledge that you have. Trying to use your voice to be an expert online or at events, write some articles, or just be known as the person to go to in your company for some thought leadership is probably a good place to start.

Staying active in that regard and keeping those relationships alive is difficult, as everyone gets busy, but worth it to really gain some perspective and advice as to how to grow.

Things do seem to be changing but what positive change would you specifically like to see in the industry over the next couple of years?

Things are changing. I do see a lot of women being recognized in all areas of the industry from tech to marketing ops and martech to the more traditional marketing roles.

What I would like to see change is to get a little bit more variety out there. We focus a lot on women, which is great, but I really don’t see a lot of women of colour or women of different backgrounds being represented as much and I think that’s where I would like to see the focus shift next. Even men of colour and men of different backgrounds – I know they’re out there! I’ve met them, I’ve seen them but I think that’s the next step is to get them some visibility. That’s a problem across tech in general, but I would love to see strides being taken to have it be less of an issue in the coming years.

What advice would you give other women thinking of speaking at an event or wanting to progress their career to a more senior level?

The advice that I would give them is to find someone who’s already doing what they want to do – or close to it – and write a really nice, personalized note. Either over LinkedIn or find their company email and send them a very nice email and see if they respond. Most people are flattered that you are looking up to them, so they most likely will reply.

Then see if you can get on the phone with them or have some sort of message exchange to see how they did it and how they got to where they are. Take a look at their career progression and see how that reflects your own plans and adjust and adapt as necessary.

One last thing I would say is to not isolate yourself to women’s groups. You know, WOE is great and it’s helped a lot and I speak highly of it a lot. But don’t exclude the rest of industry from potentially being a mentor or being someone that you could look to and learn from as well.

Are there any other groups you’re active in that you would recommend?

The Slack group #emailgeeks. I can’t always keep up with it but it’s great to ask questions and see what’s going on in the industry. Not directly email related, but there’s also a newer group called Women of MarTech, which gets into more of that technical side of marketing.

I find it easier to engage with groups that have a social media group or presence, but I’m sure more of the traditional organizations are great – I just haven’t gotten into those just yet.