With just a week until the new GDPR legislation is introduced, inboxes are overflowing with re-consent emails. These emails ask the recipient to re-confirm their interest in receiving communications, and state that no further emails will be sent after May 25th if they decline (or ignore the email altogether). Over the past two weeks we’ve collected 50 examples of these re-permission emails, and picked out five top tips to help you with your last minute re-confirmation campaign:

Align your message with your brand and product

Every email you send is an opportunity to raise awareness of your brand or product, so make the most of one of the last opportunities you’ll have to email all your subscribers. With a little time and effort, you can invite users to re-confirm while raising a smile and remind them why they signed up to your mailing list in the first place. 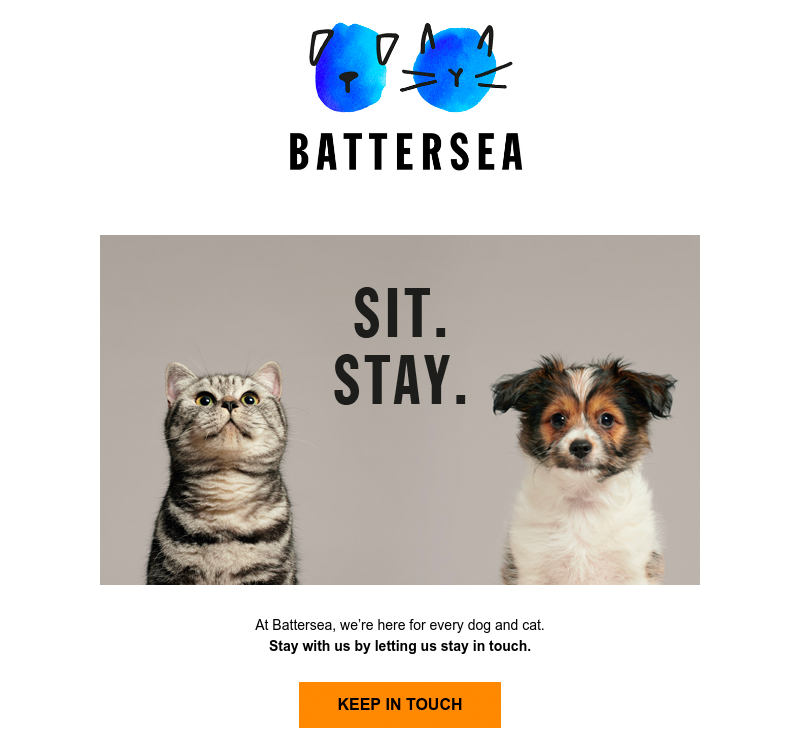 Battersea Dogs Home is an animal charity based in London. Their subject line of “Sit. Stay with us”  is a great example of how you can closely align a re-permission campaign with your brand and product, while making it fun at the same time. 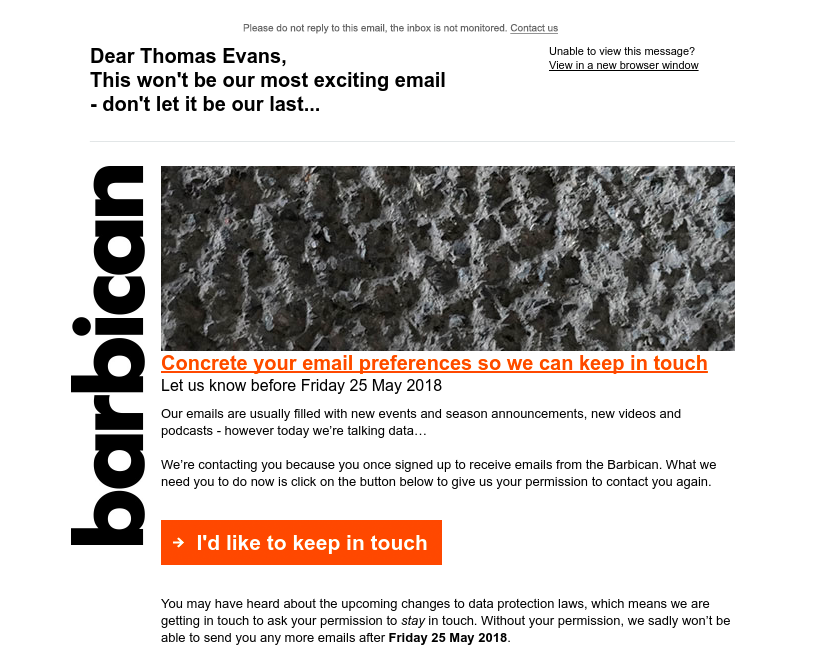 The Barbican is another great example. The arts centre, which is within an architecturally renowned complex, ran with a number of puns based on their location. The subject line “Don’t be brutal – stay in touch” nods to the style of the brutalist structure and the headline references the concrete which makes up much of the building.

Offer an incentive to re-confirm

To many organisations, the prospect of losing the majority of their mailing list is a scary one. Some companies we’ve worked with attribute upwards of 70% of revenue to email marketing; for them, it’s worth money as well as time to encourage users to remain on their list. 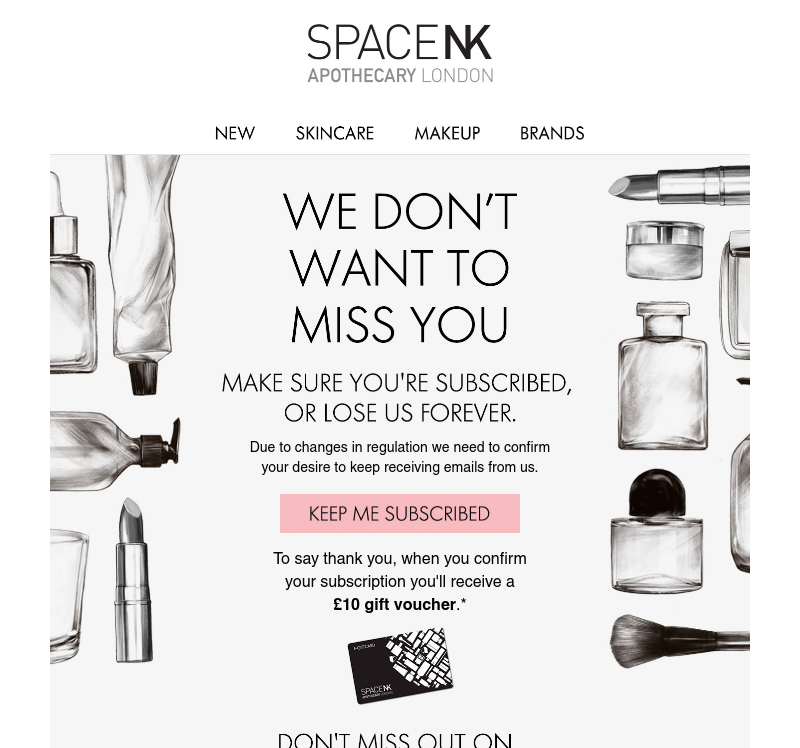 One example of an incentivised campaign is from Space NK, where presumably the lifetime value of having a customer on their mailing list exceeds the cost of the incentive offered. In the example below, the luxury beauty product retailer is offering a £10 gift voucher to all users who confirm their subscription.

Explain why users should re-confirm

If you’re not keen on an incentive and a witty campaign doesn’t align with your brand, then you should at the very least explain why users should re-confirm. There are likely genuine reasons that customers will want to remain on a mailing list, so sell those reasons. Perhaps they get early access to sale products or get the latest updates before anyone else. Your campaign should explain those benefits, just like the following example from online footwear retailer Shoon. 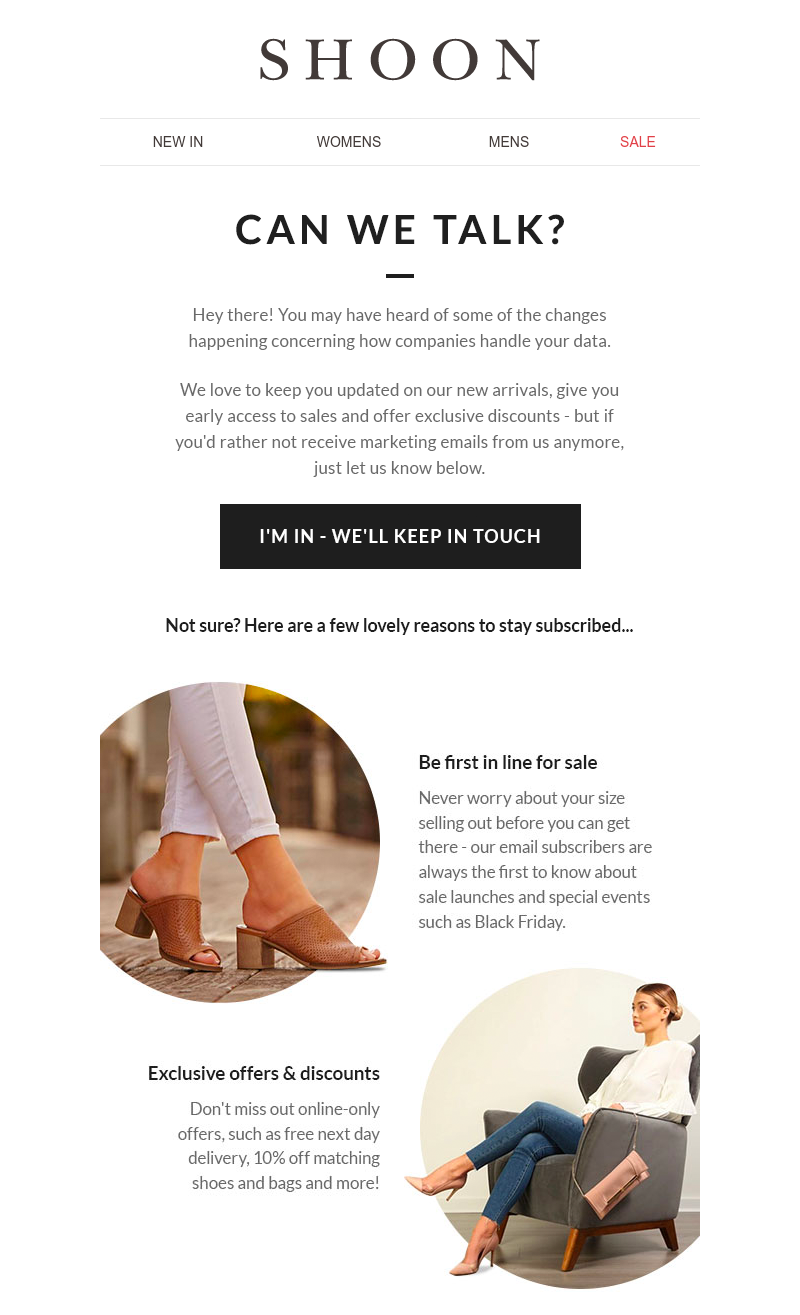 Include very prominent calls to action

This goes without saying, but make sure you make it clear what you want your subscribers to do. Below your text, be sure to include at least one large button inviting them to re-confirm. Topshop, in the example below, increase prominence through size and contrast. Their large black ‘stay with us’ button is impossible to miss. 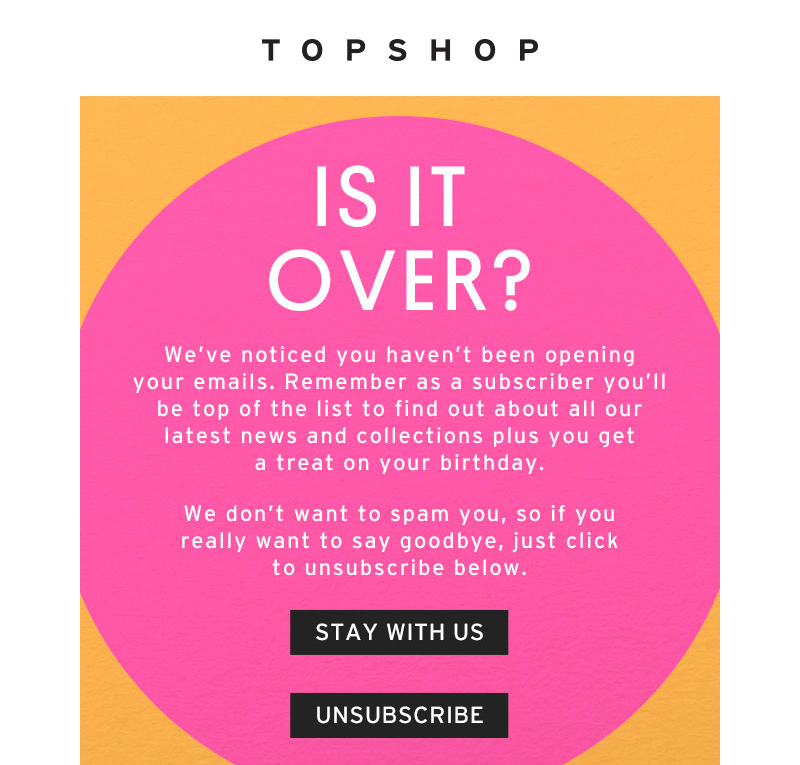 During their most recent football (soccer!) game against Derby, Fulham made use of their perimeter advertising boards to encourage fans to re-opt-in to their email list. This was the biggest game of the season – the play off semi-final – and boards would have cost upwards of £3,000 per minute to advertise on. The advert ran for most of the game which shows just how valuable a large mailing list is to Fulham. 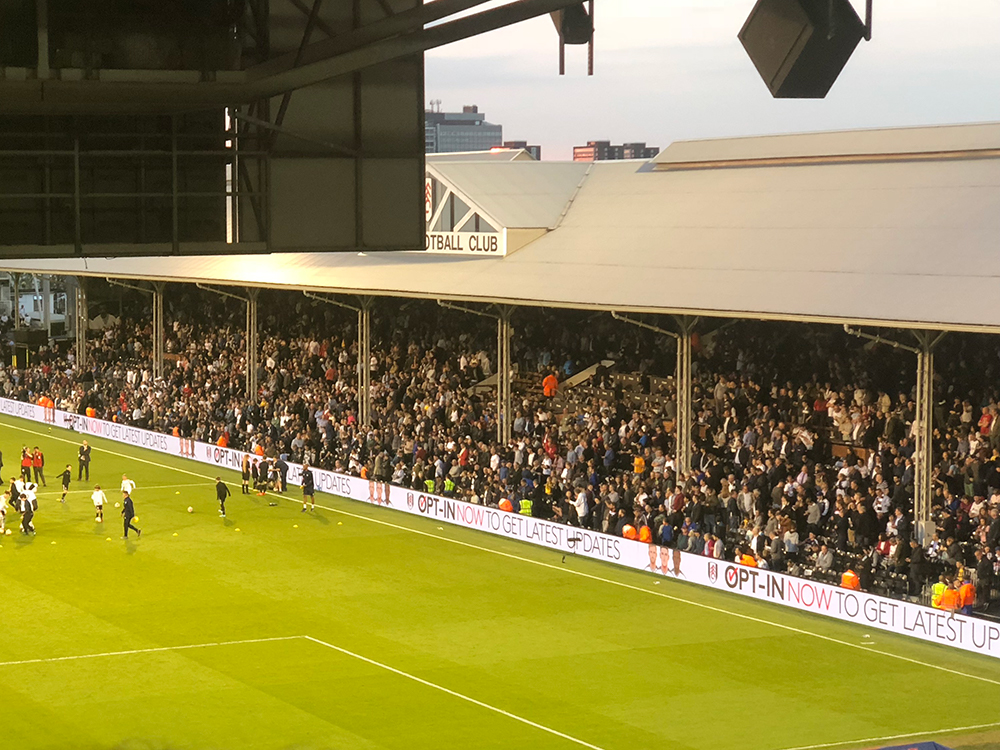 You probably don’t have advertising boards or a televised Sky Sports spot, however, re-confirmation campaigns can be more than just an email. Your website and social profiles can be good channels to re-engage customers who have missed your email in their crowded inbox. Why not try exporting your subscribers who haven’t yet opted back in, and then target them on Facebook using custom audiences?

We’ve collected the 50 or so emails which we have received and shared them the website LookAtThatSaaS. Complete with screenshots and subject lines the selection will help you get over even the biggest creative block.

GDPR
Previous story :Do I need to re-opt-in my email list for GDPR?

Next story :5 things we learned at EmailOctopus by going remote

6 ways to integrate social media with your email marketing

In this digital era, social media is one of the most effective channels in building brand awareness. But why is that important? Because increasing brand awareness means gaining more exposure to potential customers. Which is why it’s the first step in the marketing funnel. After all, the more people that are aware of your product […]

Do you know how many emails are sent daily? 246 billion in 2019, according to Radicati’s estimates. Cookie-cutter variety emails can easily drown in that kind of noise. And it doesn’t matter how clever and impressive your email content is, it will never reach the right eyes if your email doesn’t get opened in the […]

Maintaining a good sender reputation is an ongoing battle. Thankfully, there are a number of weapons available in our arsenal. And, surprisingly, welcome emails are one of them. Now you may be forgiven for thinking that welcome emails are just a nice way to greet new subscribers. But they hold much more power than that. […]

Single vs double opt-in – which is best for you?

It’s a debate that has raged among email marketers for years – single vs double opt-in, which is best? And as with most things in life, there’s no definitive answer. Because it really depends on your long term strategy and what you need to achieve with your email marketing. Marketers are so divided by the […]

Black Friday is the biggest day of the year for most ecommerce businesses. Months of planning go into their campaigns, with careful consideration paid to how their goods are merchandised and presented to potential customers. As a result of this our email inboxes are inundated with promotional offers from almost every brand, from Apple to Ann Summers. At EmailOctopus […]

When it comes to getting subscribers to take action, email marketing is often all about the art of persuasion. Whether it’s getting them to open your email with an enticing subject line or click on a link with a persuasive call-to-action.  And this where an understanding of marketing psychology can really help.  Knowing how consumers […]

8 proven ways to grow your email list from zero

If there’s one piece of online real estate where you can have complete control over the communication with your audience—it’s email. Unlike social media platforms like Instagram and Twitter, your email contact list is yours to keep and nurture. If one day any of the major social platforms goes down, your following will too—but if […]

If you’re even remotely active on social media, chances are you’re following an influencer. Even though the word influencer is sometimes used negatively, their stories still resonate with people across different target groups. And brands can find a way to match the appeal of these content creators with their existing content marketing strategy when they […]