If you know J. Cole, you probably know him as a rapper, singer and songwriter with a back catalogue full of top ten hits and Grammy-nominated records. You might not know that he’s also the head of Dreamville Records, a record label he co-founded in 2007 that boasts a roster of eight rappers and hip hop artists.

We’re excited to have J. Cole and Dreamville as EmailOctopus users – and recently we spoke to his team to hear about how they use email marketing to build their artists’ brands and keep fans engaged.

We know J. Cole’s new single release Middle Child has been a big priority recently. What else is happening at Dreamville?

The single’s been keeping us busy, and we’ve also been focusing on merchandise announcements – like the Middle Child apparel range we’ve been promoting alongside the single. Once that’s wrapped up, we’ve got multiple releases lined up and tour announcements as well. [Dreamville signee] J.I.D.’s tour is going to be a major focus soon, as well as our collaborative album Revenge of the Dreamers III which lands in April and features artists across Dreamville’s roster. 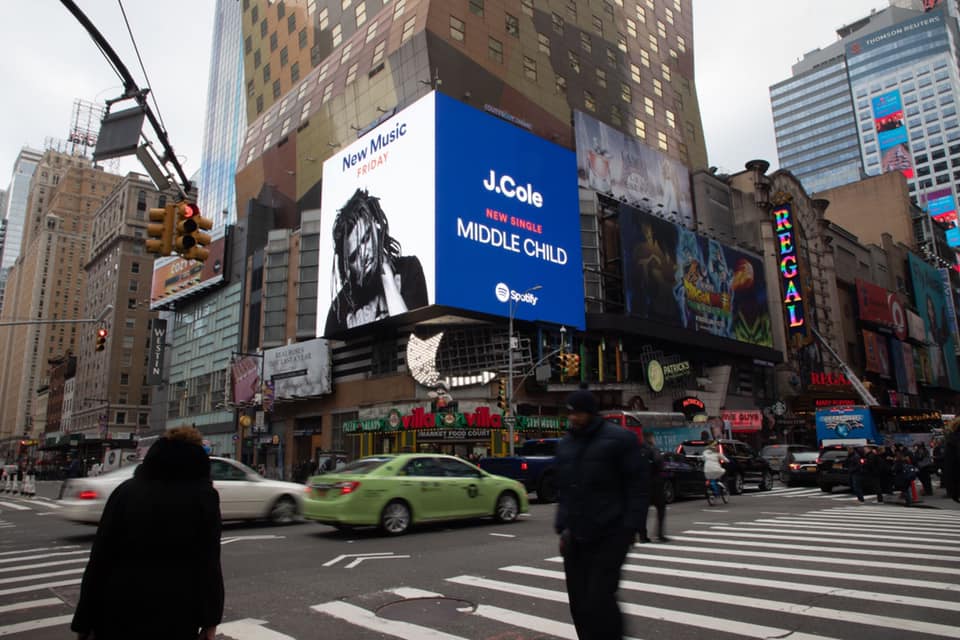 Dreamville’s artists have huge combined reach across social media – J. Cole has 12.4m followers on Twitter alone. How does email fit into your marketing mix?

Yes, social’s huge for Dreamville, but email is actually our second best conversion source after J. Cole’s direct social channels. We use email alongside our social media outlets to reach fans’ inboxes directly, in case they miss our posts on social. And it’s not just fans – we’ve also got major news outlets, blogs and other journalists on our subscriber list.

Our emails typically go out at the same time as social announcements so we’re reaching our fans on their preferred platform for updates. And it’s a pretty reliable channel for us: specifically for merchandise sales, emails tend to be the highest converting.

You’ve been using email for a while, but are new to EmailOctopus. What brought you over here?

We’ve used Mailchimp over the last few years and although the experience was pretty smooth, we found the customer support was lacking, despite the high prices. Even after spending over $1,000 a month, we often didn’t get good answers to issues.

We heard about EmailOctopus through ProductHunt, checked out the reviews online, then decided to reach out and give it a try. We made the decision to switch near the end of 2018 as part of our overall mission to update our infrastructure for the year ahead.

EmailOctopus gave us the two things we were looking for: one-to-one support and reasonable pricing.
Deepak KandaDreamville Records

EmailOctopus gave us the two things we were looking for: one-to-one support and reasonable pricing. We wanted to work with a team where we could get a personalised service and not pay an arm and a leg for it. Also, your overall mindset and vision just seemed to align more closely with our values as a brand and team – i.e. working smarter, not harder, and challenging the status quo.

That’s definitely what we want to do: give customers a great service, talk to them like people and charge what we think is reasonable – not set high price just because that’s what people are used to. How are you finding EmailOctopus so far?

The onboarding experience was really simple, especially integrating with AWS. This was new to us and we were pretty daunted – we thought it would be challenging to set up – but with your instructions it was actually super simple and easy. Also, we love the overall review page before sending a campaign. It’s nicely done and means we can take a look at everything in a snapshot rather than scrolling up and down. It takes some of the stress out of those final checks before you hit ‘send’.

With the level of one-to-one support we get from you guys, we also feel really confident and comfortable knowing you’re on hand if we need it. And last but definitely not least: we’re saving so much money compared to what we used to invest in email marketing. We’re spending $1,000 less every month while sustaining the high opens and clicks we had previously. It just makes the channel so much more profitable.

We’re spending $1,000 less every month while sustaining the high opens and clicks we had previously. It just makes the channel so much more profitable.
Deepak KandaDreamville Records

We’d recommend making the switch to anyone managing a large subscriber base and sending regular newsletters. If email’s taking up most of your marketing budget, it’s time to look at other solutions.

We always want to hear what our customers think we should be building next. If you were us, what features would you focus on?

The design templates are so useful, so it would be great to have more of these. And being able to segment lists directly in the platform by location would also really help us out.

What’s on the email horizon for Dreamville?

We’re excited about what we can do with EmailOctopus now we’ve found a platform that gives us the support and pricing we need. We’ve got the Dreamville Festival in North Carolina coming up in April this year which is going to be huge for us. We’ll be building our subscriber list by encouraging attendees to sign up for email marketing through our festival forms, and email’s going to be essential for following up with these guys and keeping them in the loop with all the happenings at Dreamville.

Email’s also going to become a way for us to learn more about our fanbase this year. We’ve got plans to really dive into more sophisticated segmentation so that we can reach specific communities with the right messages, by focussing on where they’re based and what they’re interested in.

Thanks to the team at Dreamville – it’s great to have you on board!

Tickets for Dreamville Festival on 6 April are available now. Buy them here, or just sign up for the newsletter to keep in the loop.

And whether you’re a platinum-selling artist or a small company with a big dream, find out how much you could save by switching to EmailOctopus.

Previous story :The best of Black Friday 2018
Next story :Life as an Intern at EmailOctopus

Ernie Smith is on a mission: to share and celebrate the dull side of the internet. With his twice-weekly newsletter Tedium, Ernie delves into the most mundane corners of the web and shares his findings with a growing fanbase. Since 2015 he’s kept 9,000 subscribers informed about everything from co

At EmailOctopus we have the privilege of working with a wide and colourful customer base, offering a variety of services from insurance to erotica. Whatever their line of work, we love hearing our customers’ stories of how they built their businesses and how email has helped them grow. Recently, w

Steven Edwards is the founder of etch., a restaurant in Brighton & Hove on the south coast of England. After winning MasterChef: The Professionals in 2013, Steven set about finding the perfect home for his own restaurant and etch. was born. We caught up with Steven to hear more about etch., weat

Meet EmailOctopus’s youngest creator and entrepreneur: author, designer and artist Bodhi Biddle Schneider. During the pandemic, nine-year-old Bodhi combined his love of cats, art and stories to launch a quarterly magazine, Cats Jumping on the Couch. We caught up with him to hear a bit more. Hi, Bo

Home to some of the world’s most ambitious entrepreneurs, Level39 supports fast-growth tech companies by connecting them to world-class customers, talent and infrastructure. What began as a simple idea back in 2013 has grown to a three-floor, 80,000 square foot community space in the heart of

In today’s internet age, there has never been so much online content. Whether it’s images uploaded to Instagram or tweets posted on Twitter, the total amount of data uploaded and shared is mind-boggling. And somewhere in all that content, people are talking about brands. It might be a qu

Case studies are nothing new. Businesses have long been using case studies to show what customers can do with their product or service, in a bid to attract more customers. In fact, what you’re reading now is essentially a customer case study. But in the age of social media, case studies have t

Founded in 1991 by Colin Hammond – an agoraphobia sufferer with a desire to help others like him, No Panic began as a local support group in Shropshire. The charity quickly grew to operate nation-wide with increasing interest from anxiety suffers across the Midlands and word-of-mouth recommendatio