If you’ve recently signed in to EmailOctopus, you may have noticed a couple of changes to our automations. Those changes form the base for the most significant update to the EmailOctopus platform yet, which we’re excited to be rolling out in the coming months.

Through speaking to many of you, we’ve heard the want to personalise your campaigns more, yet spend less time building them. This is where we see automations coming in – a place where you can send emails, add tags or change a subscriber’s profile without having to sign in on a daily basis to do so.

Your automations will no longer live in the campaigns screen – they’ve been broken out into a dedicated screen that you’ll find by clicking “Automations” in the menu. The campaigns screen continues to be the place for building your one-off emails – the kind of emails that you’ll send to thousands of subscribers all at once, perhaps for a monthly newsletter or a huge Black Friday sale announcement.

Automations is where your automated sequences lie. As of today, you’ll be able to build time-based sequences which will drip-feed emails to new subscribers. And in the coming weeks, we’ll be expanding this to allow you to tag subscribers, create different paths based on “if/else” conditions or queue an automatic follow-up if a subscriber clicks on a link within your email.

Breaking them out into two distinct categories will help you understand this difference easily. It will also allow our team to better explain how you can get maximum value from these upcoming features – lessening confusion and making enterprise-level email marketing simple.

Changes to our automation editor

Three months ago, we also began rolling out our brand-new automation editor. This editor moves the creation process to a flow-like chart, allowing you to visualise exactly when your emails will be sent.

The editor also forms the bedrock for our future changes, where you’ll be able to set different triggers and send your customers to different branches depending on their preferences.

With the iterative tweaks made, we’re now delighted to begin rolling out wholesale changes to automations within EmailOctopus. It’s something we’re calling advanced automation.

As we’ve mentioned above, advanced automation will include the ability to set various triggers, functions to tag subscribers, send different emails depending on specific behaviours and much, much more. It’ll allow you to create all kinds of powerful automations, such as onboarding sequences, sales funnels or anniversary emails and understand your users’ preferences better than ever.

We’re beginning to roll it out to users in Beta from early December, with a phased rollout planned. We’ll notify you in the EmailOctopus dashboard as soon as it’s ready for you to use. 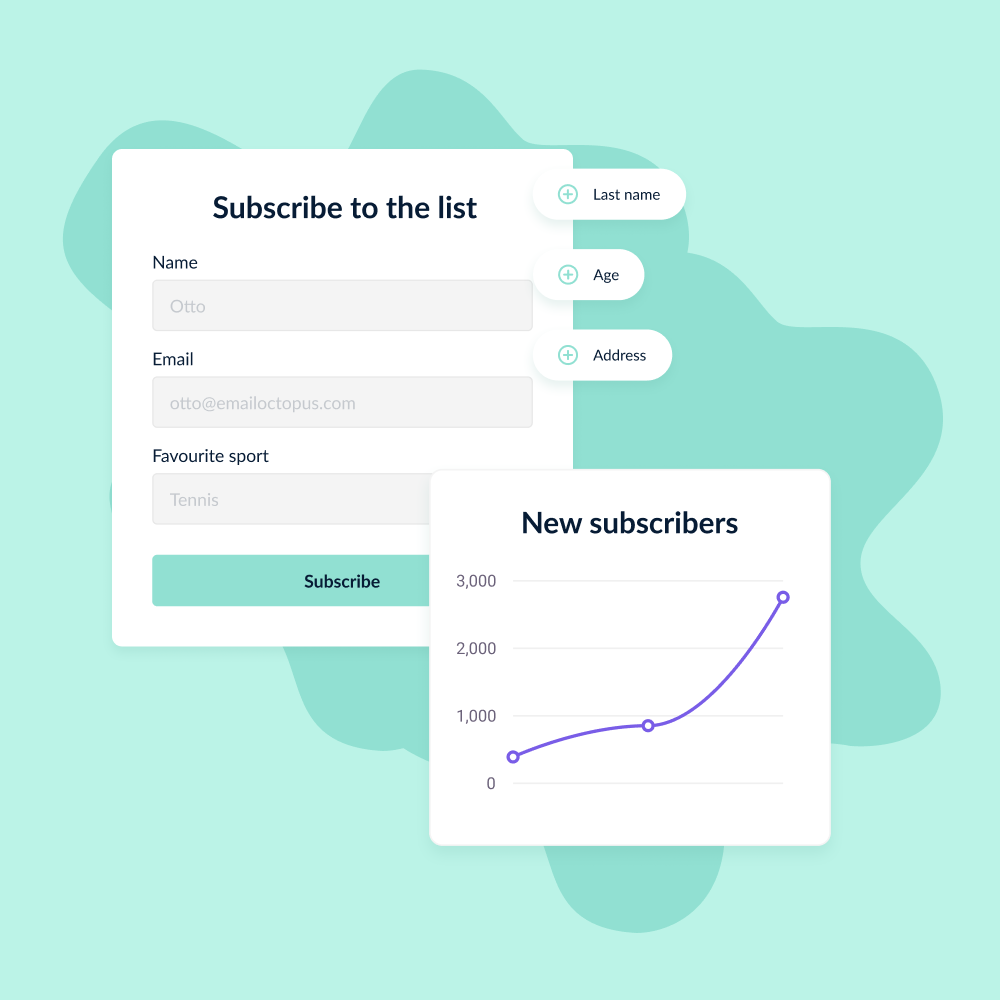 Why you should integrate OptIn Ninja with EmailOctopus

Looking to convert more of your website visitors into subscribers and grow your mailing list? Want to create stunning sign-up forms and landing pages? Well, look no further. Optin Ninja is one of the best opt-in form building services. It is a premium WordPress plugin that allows you to choose from over 20 templates and […]

We know that previously getting your images into EmailOctopus was, quite frankly, a bit of a pain. Today’s update will now allow you to upload any JPEG, GIF, PNG or SVG straight to the EmailOctopus platform when editing a campaign or template. Using the image upload function is easy. Just select the insert image option […]

Build sign up forms on Ninja Forms for your EmailOctopus lists

Ninja Forms allows you to create and design sign-up forms for your WordPress website. With nearly 1,000,000 users to their platform they are easily one of the most popular form builders on the market right now. They pride themselves in being easy to use regardless of what your level of expertise might be. Their plans include […]

We have two aims at EmailOctopus: making your email marketing affordable, and building an easy-to-use platform. We’ve already ticked the low cost box, so our focus over the past few months has been to make improvements to how our customers build campaigns. Today, we’re excited to announce a new feature which will make it incredibly simple […]

Today I’m thrilled to announce the launch of our new feature, Automation. Over the past few months we’ve listened and heard about many of your challenges within email marketing. We heard from many of your that the ability to send relevant messages at the right time to your users, was something which was difficult when using […]

Updated July 2021 If there’s one feature that our users have been clamouring for, it’s segmentation. And it’s now available – you can create segments using custom fields and campaign activity to manage your contacts in a more meaningful way. Simply sign in to your EmailOctopus dashboard, head to your Lists and you’ll see a […]

Poptin is an all new platform that provides you with engaging email capture popups and welcome mats. The platform, which launched successfully last week on Product Hunt, offers a simple drag-drop interface that allows you to create high converting popups without writing a line of code. And the best part? It syncs all your captured […]

Announcing the launch of templates

Leave a comment Cancel
Comments to: Automation is the future: how we’re improving EmailOctopus
Cancel reply